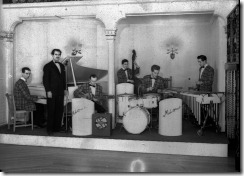 I thought, from a long time ago when I first knew about my dad’s early career in music, that this band had been called the Mellotones, with two ells. Mellow Tones, of course. But there it is in the pic – just the one. Now I think it should have been pronounced /mi:lotonz/ (a rhyme with me low tones). Or perhaps after the great ancient greek hero /məlɔtəni:z/ (muh-lot-unease). The other greek hero on the right, /vəbrafəni:z/, is being played by m’dad.

See the full gallery on Posterous

After fifty years (OK, fifty two now), Sam and Marion Crane’s hankipankerous hotel of choice still stands (at least, according to the google maps images of March, 2009 – there’s a lot of redevelopment going on around there).

This building now houses the Phoenix Police Museum. The window/door shown is the one just occluded by the front of the yellow bus shown in the other image. The museum’s website appears reticent regarding the building’s connection to the location shooting for Psycho. But I suppose, as nothing bad happened there, they wouldn’t be interested.

It is well known that a T comes out as a D if you speak like one from the USA. So one may hid a ball and not sound as if you’re using the past tense badly, or one could heed an oven with no fear of being in undue awe of white goods, or one might udder a word and not seem to be doing weird with a cow. You can get away with it since this ‘other’ read (in most cases) makes no sense.

The cob told me to wade over there, bud I shall flab my wings and fly. Buddy wants to bud cuffs on me now, so wad do I do? I need to take a bee, y’see.

And also their Ks –

Now the damn’ gob’s at me to worg on a wider line than I’m used to. It’s wider than the bride lights of the siddy – and it’s still much too gold to bee here. Things to look for on ebay

Make your own. Even better, give it to someone and point them to a shop assistent in B&Q. Film on your mobile from a safe distance.

We now bide on the outer edges of the big pin wheel. But did we come from inner parts? Were we flung out of town by a flail, an arm, a slide, of stars?

This may seem like idle spec – how could we ever know if, over the 22 or so rings round the big whirl in the sky that our sun and chums may have made since the earth was born, we have been moved out from its midst as well as round it? The earth has had bags of time to wipe out any such signs – many, many times over. But the moon, on the other hand, has been quite samey over all that time. It’s got no land drift, no snow, wind, fire or ice to wear stuff down – only the thump by the odd space rock. So it may hold a long note of the sun’s and its kids’ many turns round the thing we see as the milky way (and we don’t mean the snack), now going round at about once every 200 mega years.

That’s still way too long ago for any early human to have seen more stuff in the sky than now. Not even tiny vole like chaps were out and about back then. But t-rex and chums may have gazed upon a night more dense with stars, on the other side of the sky, 100 mega years ago.

If we go back to the moon and dig a bit, we may find signs of stuff found only in the hot busy core – and then we’d know. The mere fact that we could know means it’s not an idle idea. But it looks like we’d have to go some place else than stay here on earth.

Het spijt mij, says the Dutchman. Es tut mir leid, says the German. Aren’t they quaint, these teutons? Such archaic constructions, the inanimate doing stuff to passive old you, rather than the straightforward activity of the I’m sorry uttered by no-nonsense English speakers.

Be a man – take responsibility, don’t blame an unspecified – possibly inhuman – external agent. It bothers me that …

Hmm. OK, “I am bothered” then. But that’s not the same, is it? ‘Bothered’ remains a past participle – unlike ‘sorry’, which isn’t any kind of participle – and so still hints at an external agency having done the bothering to me. Same with annoyed, miffed, etc. And even perplexed. They’re all past participles of verbs, pointing fingers away from us. What’s going on here? What’s so special about being sorry, and how did it get there?

Is it meet it boots me wonder? (Not to go all medieval on your ass or anything).

Leaving work for the weekend

If you don’t know what this two and a half minutes of rather grainy and blocky night-shot YouTube video ‘footage’ is about, you might think it odd that somebody decided to bother posting it. It’s one of those what’s that all about?, pretty much nothing without its context. As some of the comments that go with it have said, the silence – and it’s mostly silence with measured footsteps – is deafening.

It followed something shown in a rather more dramatic eight minutes of video recording events that had happened the day before. It may not be so obvious in the first couple of minutes, just more bullying by people who ought to know better, but there’s a reason the video’s that long.

The story behind it is amazing. And wonderful. A lot has happened over the past few days. Most of it will not have been covered by mainstream news. But the story these clips tell is something significant.

It’s difficult to say with any certainty that some of the police (police are people too) in these recordings are getting pretty uncomfortable with what they’re doing. That may just be a case of inferring mental states of others from only the evidence of outward appearance – never a very clever thing to do. But if the state militarises its police force in order to keep its citizens under control, it should maybe allow for the outcome that – one day – the state might end up having to deal with a militarised police force.

I keep seeing – not regularly or even frequently, but often enough – lone cyclists pedalling along the road with knees pumping away rather faster than their resulting progress seems to indicate. They’re sat much too low down and would benefit enormously from the increased power from their legs if only they’d raise their seats.

The riders are invariably helmetless, young, close-cropped-fair-haired and dressed in ordinary non-bikey daywear. I suppose it possible that maybe there aren’t as many of them as I think. Could be the same bloke every time. I wonder if he’s just wary of the ‘bum in the air look’ and thinks he’s too ‘hard’ for that.

All that effort going to waste. It pains me and I know it shouldn’t and it’s none of my business. But, sheesh.

From the (estimable) inventor of Kindle It:

Kindle It lets you send articles you find on the web to your Kindle or other e-reader for easy reading. It is being developed as part of the Five Filters project to promote independent, non-corporate media.

Kindle It works by processing web pages in roughly the following way:

This is damn’ handy if you have a kindle and you encounter a web page or blog article (pretty much anything really) which you would like to read, but it’s too long, or you’re too busy at work. You think I must remember to read this when I get home tonight and promptly forget about it, or where it was.

With this browser add-on, you can – instead of forgetting – take instant action in your browser as soon as that ‘I’d like to read this at home tonight’ thought occurs to you. Just click on the kindle icon, or use one of those there deft keystrokes (here, it’s Control-Shift-K) and a window pops up with the article in it (so you can have a quick look to see if what you want is all there – it usually is). If you’ve set up your kindle to allow emails from this service address (kindle@fivefilters.org) then just click the button and your kindle will pick it up for you the next time you refresh it.

The text is well laid out – not too surprising since you’re generally starting from html and not pdf – and you’ll probably find all of the relevant images (if – say – there were any photos in a blog article) have arrived too.

And of course you don’t even actually have to have a kindle – you could just use the kindle emulator software (but it’s not the same).

This is why they invented computers.